I forgot to mention a big reason why I may have to quit. This last Teusday the 15th I had Jury Duty at 8am. I asked my boss if I could have monday night off so I wouldn't be really tired. He said no, because I wouldn't be out all night, I'd only be doing the 3 patrols. Well I did the patrols, and went home as usual, and didn't get any sleep. I told the judge that I thought it would be too hard for me to be a juror, because of lack of sleep. He didn't think my boss had a right to keep me from jury duty by not letting me off. But the only reason he excused me was because of financial hardship. And that was only because the prosecution and defense had no objection.

I just found out I'm worse off than I thought at first. I'm making only $5 per day for those 3 days of patrols. And I saw a timesheet from another guard that is even Worse off than I am, nothing but patrol days all week! That's 5 days at $5 per day, with two days off. WTF?!

This is not an advertisement, I just wanted to mention this bank. Although they did misspell my last name, they are correcting the problem. For some reason they have a toll free #, but they have not put it on there website or anything. So I'm going to post it here, 1-877-705-1894. They supposedly don't charge overdraft fees, which is why I want to check them out. I hope they do as they claim.
Posted by Aaron Paul Ingebrigtsen (Krepta) at 7/17/2008 09:31:00 PM No comments:

My sister, Tamra, just found this awesome Museum and they have my Grandpa listed, Yay!  I hope they do more than just put his name somewhere.  This is just so awesome!
Posted by Aaron Paul Ingebrigtsen (Krepta) at 7/14/2008 07:47:00 PM 1 comment:

I recently heard about a keyboard layout that is faster and more efficient than the standard layout I have always used. I also heard that the standard we use was invented to SLOW you down, because typewriters had arms that would strike a paper, and if you typed too fast, they would get jammed up. So I printed the Dvorak layout, and rearranged the keys on my keyboard and laptop. Telling my Ubuntu Linux to switch between the Dvorak and standard layouts was very easy, unlike on Windows XP. I've been using Dvorak for a couple weeks now. I'm using it right now! Once you learn it, it's really easy. Dad thinks I'm nuts. It's just my newest Obsession! :D

Here is a screenshot of my desktop. 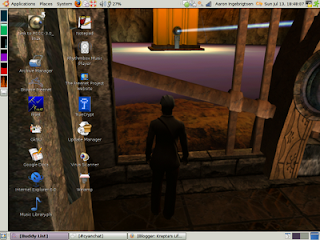