There are some calculators that are programmed INCORRECTLY to use the Juxtaposition, aka Implied, multiplication super priority convention.  I know of only Casio calculators with this crappy programming.  Here is the problem, in a nutshell, giving priority to Juxtaposition multiplication over division breaks existing math laws, the Order of Operations.  Therefore it is invalid.

The Order of Operations is based on Logic and the History of all Mathematics, it is not a mere whim, it is not a mere convention that people use just because other people use it.  It was born when Multiplication was invented as a shortcut for additions, and has evolved along with mathematics ever since.  ANY convention or technique that Breaks the rules only adds confusion that is totally unnecessary.

Does X equal the 2 I replaced?  Yes, it does, therefore 58 Is The Only Correct Answer!

Making the 2 times 3 come first is exactly like putting a dead mouse in a trap before putting the cheese in it.  It's ass backwards.  It's stupid.  It's breaking the rules that apply to All mathematics All the time.

So, how do you fix calculators and programs with this totally idiotic convention programmed into them?  Simple.  Reject the idiotic convention entirely.  Every time you see it, no matter what type of mathematics being used, put in a multiplication symbol.  It's not that hard.  Just turn the above expression into 6^2/2*3+4, and it will all work out as it should.  Bug Fixed!

Example of a correctly programmed calculator: 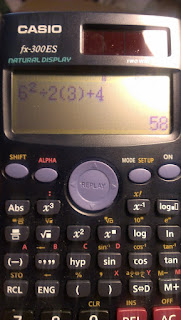 Example of an incorrectly programmed calculator: 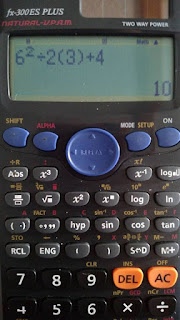 Notice that both of these calculators are Casio calculators?  Notice that the Plus calculator gets it Wrong?!  Yah, shocking huh?  Remember to always replace Juxtaposition, Implied, multiplication with Expressed multiplication, and everything will work out just fine.
Posted by Aaron Paul Ingebrigtsen (Krepta) at 5/16/2016 03:10:00 PM 2 comments: Links to this post